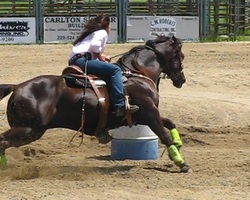 My stallion sprained the suspensories in both back feet really bad during a run. Vet said it would take a year before I could ride him at all again. I used DRAW/Water mixed 50/50 on him, and wrapped him in no bows when I turned him in his pasture. I used the DRAW/DMSO/Water mix with NO wraps at night in his stall. The mixture is a 1/1/2 ratio(example...1 cup DRAW, 1 cup DMSO, 2 cups Water). Vet was shocked when I took him back for a checkup. He sprained in September, and he passed the ultrasound and flex test in December. He was cleared to compete again in February that year.
- Andrea Fleming 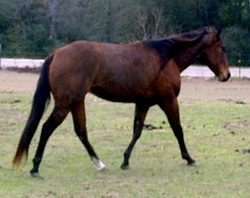 My gelding had loose locking stifle ligaments. He was locking bad in the pasture a few times a day, but if I stalled him he would be locking the next morning just trying to move in his stall, and lock up 4 or 5 times just trying to get him down my 48' alley in the barn. If he tensed up trying to pick up his back feet, he would lock almost every time. I had 4 vets tell me there was "no way" I'd get him fixed without an internal blister, and more than likely surgery to split him...He was 2.5 yrs old when I got him. I brought him home, and use a mix I make of EXTRA Strength DRAW/DMSO on him. The mix is a 1/1/2 ratio…(example 1 cup DRAW, 1 cup DMSO, 2 cups WATER). I also used DRAW Topical(acupressure points for back legs). Three weeks later I stalled him for 3 days because we had horrible weather, and he wouldn't lock at all. I sprayed him with the mix each day, and walked him up & down the alley of the barn twice a day for about 15 minutes because it was too nasty to get out of the barn to stretch. Now, he gets stalled every night, and never locks.
He also had a knee that was the size of a cantaloupe from an old injury as a yearling. He had popped a splint, and damaged his knee when he got hung in a panel. The day I bought him I could see him coming across a 10 acre pasture with that knee. Vets said he was sound, but the size was cosmetic and might never look be normal again. I sprayed it with the EXTRA Strength DRAW/DMSO/Water mix, and used DRAW Topical(front leg points), and 3 months later it went from 40cm around to 34cm around, and now his knee looks totally normal.